Chulet was hiding at home waiting out her 3 days..

The next day, Chulet’s baby sister (from henceforth names as bb-dragon)was on her way back from Melbourne. Unfortunately, bb-dragon was stopped at the KLIA airport as the thermal scanner picked up that was she was having fever and showing other symptoms of flu. She was requested to get herself checked for H1N1.

When she got home, all of us were very concern as bb-dragon has asthma history. So, after taking panadol, Chulet’s make the decision to bring her sis to the Hospital. After checking online, it was mentioned that some of the private hospital we could go to includes Subang Jaya medical centre, Pantai Medical, Sunway and Sime Darby. Chulet called the Sime Darby medical centre and they say that they are not ready to handle H1N1 cases yet. So, Chulet decided to go straight to Subang Medical Centre.

Unfortunately, upon arrival, the staff told us that they are still in the midst of applying to handle H1N1 cases. Chulet was annoyed. (It was on the newspaper !! meh..)

Anyway, since the staff were all so polite, chulet let it go..

We told to to go to Sungai Buloh Hospital or General Hospital.

Chulet suspect that there should be less people in Sungai Buloh hospital, considering that this hospital is like at out-of-no-where ! So, that was where we went.

Taking the NKVE heading towards Sungai Buloh, we took the exit where it say Sungai Buloh hospital. If I recall correctly, it should be a few exit after the Kota Damansara toll exit. Once you come out from the toll, the Hospital is right in front. Very hard to miss. They have banners all around the outside of the hospital pointing the H1N1 cases to the emergency entrance.

So, after parking the car, Chulet and bb-dragon went to the emergency entrance. Tents were setup for the patients showing symptoms of H1N1 outside. 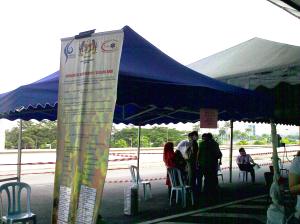 We were told to take a seat beneath the tent and someone will come along to take our details. The hospital staff come and started asking us some questions and taking our temperature.

Luckily, there was sufficient fans, so, it was not really hot.. And since the tent was under a shaded area, it was not that bad either. While waiting, Chulet got thristy and ask the hospital staff if they have water. They are so nice and sweet. They quickly went to find some packed water and started distributing for us. :o) that was nice !!!

After taking our particulars, the hospital staff will study it and then some of the people will be given medication and ask to go home with some medication. Another batch will then proceed to another room. Chulet and BB-Dragon were asked to proceed to the other room. 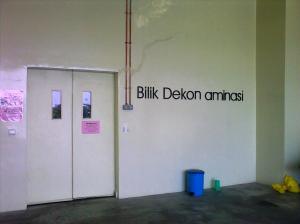 It is called the Decontamination room. I am sure the ‘T’ was missing in this case.

This is where we wait for our turn to get our throat swapped. During the throat-swapped, the nice hospital staff told us that we will need to quarantine ourself for 2 days and wait for the results. During this time, we are to start taking medication which they will provide to us later.

Leaving the room, we waited for the medicine. After receiving them, we were told that we could go home. (It is FREE !)

I got a call from the hospital one day later to give us GOOD news. We are free from H1N1.

But, that doesn’t mean that we are not having flu.

What we are suffering is the common seasonal flu.. oh well…