Bah-Chang or DuanWu festival is a traditional festival celebrated in the Chinese community around the world. It is also declared as one of the public holiday in China, but not in Malaysia (where Chulet stays). The DuanWu festival falls on the 5th day of the 5th month (Chinese calendar) and this year, it is on the 28th May (which is TODAY!!!)

Bah-Chang (in hokkien – one of the many Chinese dialects) translates to meat-dumpling. It is also known as Zhongzi (in mandarin).

So, how does one describe the Bah-Chang? Pyramidal-shaped dumpling wrapped with bamboo leaves filled with fatty pork, duck egg, mung beans, dried prawns, mushrooms, chestnuts and the most important of all glutinous rice. (In some recipes, ingredients such as dried scallops, abalone, and others are added). After that, the dumpling will be boiled in slow fire for 5-6 hours!

Chu-mama just got back from Thailand and with her she bought some top quality glutinous rice for this occasion… Yes – she actually lugged about 10kg of rice back. After 2 days of hard-work, she and my aunty manage to wrap and prepare 50 dumplings only! 😛 Unfortunately, this would means that there won’t be much to go around. The solution ? Chu-mama only limit everyone from the family to take ONE !! haahahhaa..

Luckily, she was kind enough to hide some extra for us kids. So, chulet ate 2. 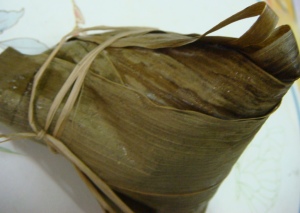 Chu-mama’s version of the story about this festival is to celebrate this famous poet (Qu Yuan) who drowns himself on the 5th day of the 5th month. He is supposed to be some sort of high officer until he was accused of treason and was placed in exile. At that time, he opposed to an alliance decision (to a neighbouring country) made by his king.

Later, when this neighbouring country conquers his homeland, he drowns himself. As the people love him very much, they prepare the dumpling to throw into the river to feed the fish so that the fish do not eat the body of Qu Yuan.

There were also villagers that row their boat to where he drown and start hitting the water surface in order to scare the fish away. So, apart from eating the Bah-Chang, some countries also have the Dragon Boat festival to commemorate this festival.