2 weeks ago while browsing around youtube; I come across Jamie Oliver’s food revolution clips. Intrigued and curious, I started watching these clips and was instantly hooked. Even hub who is usually glued to his computer actually come over and join me when I watch the clips.

After completing season one.

I started watching season 2 which will be inLos Angeles. It was a shock to me when I found out Jamie was not allowed into the school cafeteria. It makes the whole thing really dodgy and suspicious. Are the kids being fed with Evil burgers? 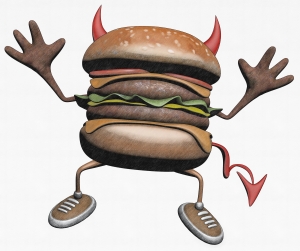 What are the school feeding those kids that no camera is allowed inside? Hub told me that inUSA, certain company has really strong influences. He told me his bro went to this university town (about 40,000 populations) which only can serve and sell coca-cola (so, no Pepsi or any other cola brands are allowed into this town). Even water is more expensive that Coca-cola. I was shocked by this. O__O

I always looked up to USA as the ‘supposed’ leader in freedom of choice and etc. But, if something as simple as the choice of drinks / brand is stripped from someone, what type of freedom of choice is there left?

And, when I found out that ABC canned the show. I was really disappointed but not surprise. I was pretty sure there are many ‘big shots’ in LA and they would not like someone poking around their products. Not to mentioned, if their products do get canned, imagine their profits! And also the big fat bonus…So, a little call from some of these is going to make a lot of doors closed.

There must have been a lot of upraise when the show was benched because weeks later, ABC announced that the show is not canned but will continue in June but at different time slot. What rubbish. If the show was not canned in the first place, how come it was not showing in May? And then brought back again in June?

Schools are suppose to be the educator. Parents send their children for education to learn and be better in life.

I always wonder why parents always have hard time getting their children to eat their vegetables.

Now I know why, why would the kids eat vegetables when the schools are feeding them nuggets, fries, pizza and sugar loaded milk for breakfast and lunch? And in one of the episode I learn that fries are consider as vegetable in their rule books !!! speechless and shocked.

Thanks to a great friend – Lyn for introducing hubs and me here for dinner. A quaint little shop tuck away along Nordstrasse in Dusseldorf, Germany. If you have not been looking, you would have easily walk pass this restaurant.

Once we are in, we were greeted warmly by the owner as Lyn knows him and also she speaks perfect German. Luckily, the waiter there could also speak English. Hence, hubs and I actually went back to this same restaurant 3 times during our 2 weeks stay in Dusseldorf.

Some of the dishes we tried

Tomato brochette – toasted crispy bread with freshly chopped tomatoes drenched with olive oil (heavily scented with the black olives. Best I ever had.

Goat cheese salad – it’s ok. Not exactly my cup of tea. But some would love it for the strong cheese taste. 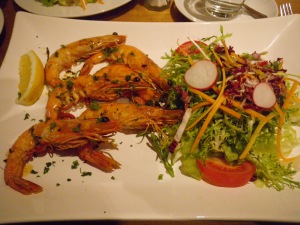 Grill prawn Salad – love the lightly grill freshness taste of the prawn sprinkled with dash of paprika and salt for flavor.

Stuff Chicken breast with some cheese (I forgot) – hence, you know it was not a very memorable dish to me.

Now, for the highlight of the evening. The grill Entrecote – Oh la la… It is definitely the BEST steak I ever had (till date: Oct 2010) 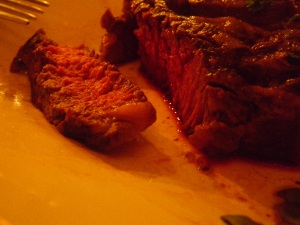 The meat was done to perfection for medium – look at all the juice. Meat was well marbled so each bite was amazing and bursting with BEEF ! This was the main reason why i return back to this restaurant for 3 times. :p

For those of you who are around Dusseldorf area, why not drop by this restaurant and give it a try.